Actress Yvonne Nelson is of the view that people must respect and know how much value they carry in life in order to attract equal respect they expect from others.

The actress expressed this thought just hours after some of her colleague celebrities had a meet-and-greet fiasco that should have taken place between them and American rapper, Cardi B.

It is not clear if the tweet is in reference to the incidence but one will be surprised if it is not, especially when she wasn’t part of the celebrities who were at the Kenpiski Gold Coast Hotel.

It would be recalled that the likes of Hajia4real, Moesha, Becca, Efia Odo, Sandra Ankobiah and Afia Schwar, among others, couldn’t meet the rapper late Sunday afternoon shortly after she touched down in Ghana.

The disappointment angered the ladies with Hajia4real taking to social media to say she felt disrespected by the Cardi B ‘no show’, thereby taking to her Instagram page to pour out her frustration.

According to Hajia4real, she and her colleagues waited for hours only to be told by the promoters that they could not have access to Cardi B.

What baffled Hajia4real’s mind was when she walked to the poolside of the hotel to find Cardi B chewing skewers at a time she was supposed to be meeting them.

In a subsequent interview, Cardi B claimed she wasn’t aware of the meet and greet gesture because promoters didn’t inform her of same.

Ghanaians have since trolled the celebs for not having the chance to meet Cardi B, with many claiming they love too much hype.

Yvonne Nelson, taking to her Twitter page on Monday morning, has therefore, advised Ghanaians to value themselves. 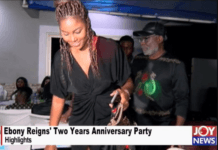