Irate youth have set an alleged armed robber ablaze in front of Bonsu Nkwanta Police Station in the Juaboso District of the Western North Region.

The robber was a member of a syndicate suspected to be behind stealing in the district.

He was busted after stolen phones were found on him at Bonsu Nkwanta while onboard a car to Kumasi.

One of the suspects was handed over to the police, while the irate youth took charge and lynched the suspect after which he was set ablaze.

The youth have also threatened to vandalise the police station if the other suspect is not handed over to them.

The police say they have called for reinforcement from Sefwi Wiawso, the regional command to ensure safety. 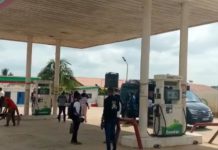