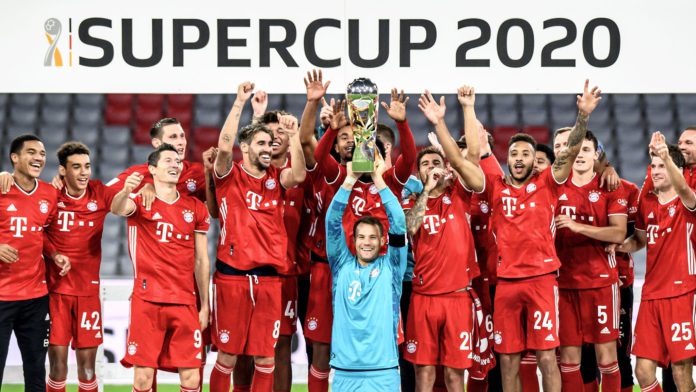 Two goals from Robert Lewandowski helped Bayern to a 3-1 win over Borussia Dortmund in the DFL-Supercup on Tuesday night.

Fresh from their convincing weekend win over Eintracht Frankfurt at the weekend, Dortmund continued life without Jadon Sancho by starting with Erling Haaland up front, supported by the 16-year-old Youssoufa Moukoko, and fellow teenager Jude Bellingham teamed up with Gio Reyna in midfield.

Bayern, looking to kick on from their opening day draw with Borussia Monchengladbach, picked Omar Richards and Jamal Musiala to start from the bench, with new signing Dayot Upamecano named in the defence.

It appeared there would be no goals in the first half until Lewandowski grabbed the first on 41 minutes, and Thomas Muller then added another four minutes after the restart to double the lead.

Dortmund captain Marco Reus pulled one back on 64 minutes to give the home side hope, but talismanic striker Lewandowski reasserted Bayern’s two-goal advantage 10 minutes later. With one eye on games to come, the Polish striker was taken off a few minutes early to be replaced by Eric Choupo-Moting.

The Supercup victory for Bayern is the ninth time the club have won the tournament, stretching their lead as the club to have won the cup the most times.