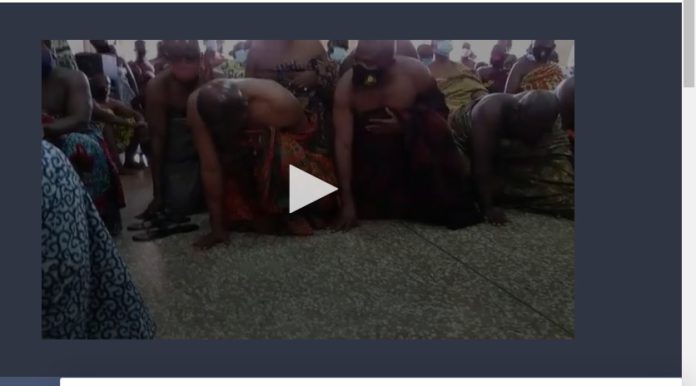 A video making the round on social media has the Bantamahene, Baffour Owusu Amankwaatia IV on his knees before the Asantehe Otumfuor Osei Tutu II as he begged.

The Bantamahene, according to reports, was summoned before Otumfuo for misconducting himself and desecrating his stool.

The head of the Konti Division of the Ashanti Kingdom was dragged before the King after a delegation of sub chiefs sent to the Race Course Market came back with confirmation that he had encroached on parts of the land and also diverted the course of the Subin River for his private gain.

The Bantamahene was said to have forcefully taken over parts of the Race Course land for the construction of shops; he has also filled portions of the Subin River with sand and diverted its course.

His action has greatly infuriated the Asante King as he threatened to destool the Banatamahene over the conduct.

According to reports, a vote by all the divisions including Nifa, Kyidom, Adonteng, Akwamu and others with the exception of Benkum which had no representative at the time of the deliberations said the Bantamahene had acted in bad faith.

They however pleaded for clemency on his behalf.

But the Akyeame (Linguists) impressed on the Asantehene to outrightly dismiss Baffour Owusu Amankwaatia IV for gross insubordination.

Otumfuo Osei Tutu II said he would have destooled him but for the kindness of the chief’s father to him in the past.

The King immediately directed that all permanent structures on Race Course lands be immediately demolished and the course of the Subin River restored.

In the said video Bantamahene, Baffour Owusu Amankwaatia IV is seen with his subjects crawling for mercy before the King as they are reprimanded.

Watch the below for more: