The singer who has been under pressure to get married revealed this on his instagram page @Bankywellington at the early hours of Wednesday.

According to him, he secretly proposed to Adesua in February 2017.

He further noted that they have had chemistry even before their cast as a couple in movie ‘Wedding Party’ adding that this was not a promo for a movie or video.

He wrote: “In that time, I got engaged to you in my “made for you” music video… and by pure coincidence, we both got cast to get married in the wedding party movie… but all the while, we were the very best of friends. I guess, in our case, real life will now imitate art.

“PS: The timing of this may make some people think this is promo for another video, or a movie. It isn’t.

“Ironically, everyone who has seen us together in art, or in life, always insists that we have amazing chemistry. I guess you can say we have been hiding in plain sight.

I fell in love with an Actress. Now my life is a movie.”

“In February of 2017, I asked Adesua Tolulope Oluwaseun Etomi to be my wife. She said Yes.”

Adesua Etomi reveals how she fell in love with Banky W

Newly announced Bride-to-be of Banky W, Adesua Etomi, has revealed how she met and fell in love with the the ‘Yes/No Crooner’.

She revealed that their love story started in 2015 after BankyW approached her at an event asking her to be his friend.

Adesua appreciated how patient and persistent BankyW was with her for a long time before she realized he was the one for her.

On her Instagram page @AdesuaEtomi, she wrote: “I went to an event in 2015 and I suppose that was the beginning of something amazing because once Banky saw me, he decided that he was going to be my biggest fan.

“He slid into my DM and sent the funniest message and that was how we became friends. At the time, I wasn’t interested in anything but a friendship and he was very respectful of that and so we stayed just friends for about a year and a half.

“Olubankole, Your Heart is pure and good, to the very core. You are proof that God is real, you are proof that what’s on the inside is greater and so much more powerful than what we see on the outside and you are the evidence of what I hoped for.

“I bless God for entrusting my heart in your hands because I know it’s safe. You are everything i prayed for and so much more.

“And i’d like to say one more thing. I’m SO SORRY that it took me sooo long to realise that it was you. It has always been you. It couldn’t have been anyone else.

“It will be an absolute pleasure and one of the greatest blessings of my life to walk the path of life with you.

“Thank you for being who you are.

“My goodluck charm, my King, my lover, my bestfriend.

“I love you till eternity and beyond.

Some Nigerian celebrities have reacted to the latest news of Banky W’s engagement to Actress Adesua Etomi.

The development has generated many reactions from celebrities and Nigerians on social media.

Big Brother Host, Ebuka Obi-Uchendu who is also his close friend congratulated him, revealing how hard it was for him to keep their relationship secret.

He wrote on his Instagram page @Ebuka: ‘I can’t believe how long I had to hold this in for.

“Feels great to finally be able to shout “CONGRATULATIONS” to this beautiful couple!!!

“Sounds cliché but it does honestly feel like you guys were made for each other. Really can’t wait for what the future holds for you two.

“Love you Bubba and Susu.

RMD wrote: “Awwww… My babies, your love brings happiness to my spirit and tears of joy to my heart. I’m proud of the man you @bankywellington are and you my sweetheart @adesuaetomi are one of the few young people who give me hope in this generation.

“That both of you know Christ the way you do and love him with your hearts is such a joy. Now that we’ve gone public, let’s go wild with the wedding planning.

“Papa bear is proud of you both. God bless this union.” 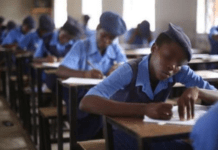