The Asantehene, Otumfuo Osei Tutu II, has called for the enactment of a new law that will prevent present and former governors of the Bank of Ghana (BoG) from establishing their banks in the country.

He explained that the current system whereby former and present governors of the BOG are allowed to establish their own financial institutions clearly amounts to a conflict of interest.

“You cannot be a regulator and player at the same time, therefore there should be a fresh law that will strictly forbid present and former governors of the BoG from establishing their own banks in the country.

“We have some examples to give when it comes to present and former governors of the Bank of Ghana establishing banking institutions in the country, and so I am calling for a law to prevent such thing from happening.”

Otumfuo Osei Tutu II disclosed this in a speech read on his behalf by the Akomferehene Oheneba Akwasi Abayie during the inauguration of the Bank of Ghana (BoG) Data Centre at Ahinsan in Kumasi on Friday.

The previous Asantehene gave the land to BoG in 1988, and management in 2016 contracted STL to construct a state-of-the-art three-storey Data Centre and Disaster Recovery Site to help boost its operations.

Otumfuo Osei Tutu II said there is no country in the world where people who occupy sensitive positions similar to that of the governor of the BoG are allowed to establish their banks.

Governor of the BoG, Dr Ernest Addison, who was the guest speaker, said the inauguration of the Data Center and Disaster Recovery Site would significantly help to improve the operations of the Central Bank in the coming years. 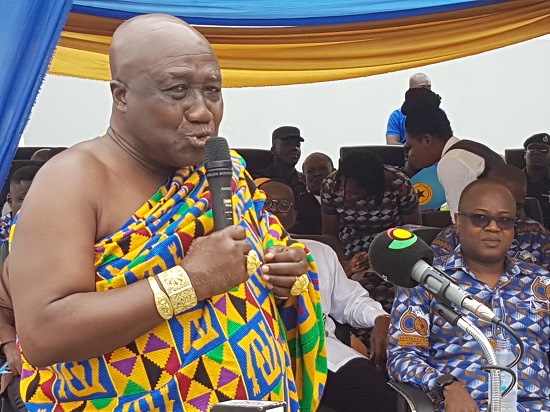 He announced that BoG, as part of its corporate social responsibility, would build a bridge over the Susan River and also rehabilitate the bad road that leads to the centre at Ahinsan soon.

The Governor of the BoG recounted the various initiatives that his outfit has instituted over the years, especially in the area of Information and Communication Technology (ICT), adding that the Data Centre would help BoG to address the numerous problems.

Michael Anyamesem, Ashanti Regional Manager, BoG, commended the Asantehene for the vital role that he played in the eviction of squatters from the land at Ahinsan to pave way for the execution of the project.

The ultramodern facility, which is the first of its kind in the country, boasts of security gadgets, CCTV and WIFI, among others, to enhance the operations of BoG.