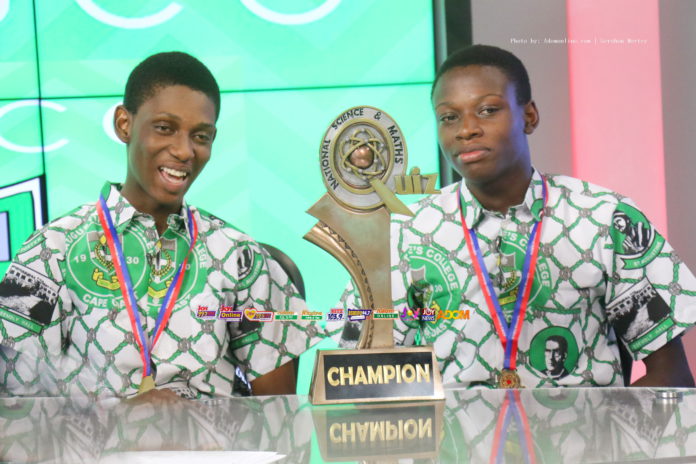 A trophy drought is a hard thing to break. Ask the Black Stars. It has been 37-years since the last trophy.

But if you are looking for rainmakers – ask two boys from St. Augustine’s College whose heroics have ended a 12-year drought at the National Science and Maths Quiz 2019.

Apparently, there is a science to rain-making.

Then they hashed completely a Presec hashtag to promote a potential record sixth trophy. #letstalkaboutsix was number two on twitter. Now let’s talk about next year.

But the true weight of this achievement is seen in the fact that last year, they were not even here. No, I don’t mean the finals. They were not even part of the competition. They watched at home.

The big school have had little to show for in competitions. Only monochrome pictures of yesterday’s heroes piling dust and cobwebs in their headmaster’s office.

At times, St. Augustine would arm-twist three points from the quiz mistress with long winding answers until hitting all the key words, an exasperated mistress would get give up the three points.

Presec, St. Peter’s tried long-winding answers too. ‘You people like telling stories’ Dr. Elsie Kaufman would say and add ominously, ‘I am not accepting that [answer]’.

St. Augustine’s College won the first round by a handsome difference. They kept their lead after two rounds with 28pts. Presec 20pts. Peter’s 11.

And although they didn’t do well in solving a question on Down’s syndrome, Augusco didn’t go down after that Problem of The Day round.

And when Augusco fans saw their substitute Newton, rise up from the front row and walk across to prepare for the Fourth Round, the Augusco into singing ‘Things are getting better’.

Newton is a super-sub. He changes Augusco’s game either through comebacks or simply strangling the opponent to keep any ideas of an upset unlikely.

The boy walks about with a name associated to the English physicist who propounded the scientific laws of motion. When he steps in, it is an unofficial game. And he stepped in.

To be fair, Newton got one question wrong. The first time ever he has done so and Presec and St. Peter’s celebrated his miss like Menzgold clients celebrated NAM1’s arrival.

There is always something to take away at NSMQ grand finale. There is the trophy, the trolls or, as we found even regrettably in 2017, the quiz mistress’ bag.

A word about St. Peter’s. Their main man, Michael eyed Wesley Girls High School and called them ‘the Egyptians you see today, you will see no longer’, a verse from Exodus.

He was right. St. Peter’s added Wesley Girls SHS to an exodus of more than 125 schools at NSMQ.

And so when Michael referred to the dying words of Jesus on the cross, ‘it is finished’ the defending champions released a psychological fog of fear in the auditorium.

Jesus looked to be in the boat of his cherished disciple St. Peter’s. Until he jumped into St. Augustine’s boat after the first round. And stayed there.