A former Deputy Minister of Food and Agriculture, Nii Amassah Namoale, has said the Chief Executive Officer of the National Youth Authority, Emmanuel Asigri, wasn’t qualified for his position at the NYA.

According to Mr Namoale, suspended CEO didn’t resign because of the alleged procurement breaches but because he did not have the requisite academic qualification for that position he occupied.

Speaking on Accra-based Accra FM, the former Deputy Minister alleged that Mr Asigri did not have the minimum requirement for the position which was the first degree.

“Asigri was not even qualified for the job in the first place.  He is just an HND holder. A lot of people enter into politics and they portray themselves as having attended school here and there and attained this degree or that degree, yet they don’t have those qualifications,” he noted.

“People pretend to have degrees when they don’t actually have, and I will appeal to the political parties to be wary of that,” he said

Mr Asigri resigned from post a few days after a member of the Authority’s Board, Mr Arnold Boateng resigned over what he described at the time as “real issues” at the Authority.

It is unclear at this stage what the real reason for the resignation is although reports suggest that the NYA CEO was forced to resign over alleged procurement breaches. 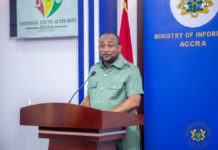