Outspoken Member of Parliament for Assin Central, Kennedy Agyapong has fired salvos at the Ghana Independent Broadcasters Association (GIBA) for championing what he says is a politically motivated agenda.

According to him, their claim that government intends to hand over Ghana’s Digital Terrestrial Television (DTT) platform to Chinese firm, StarTimes is “politically motivated”.

GIBA, which fronts private broadcasters in Ghana, says handing the management of Ghana’s DTT infrastructure to StarTimes, a foreign competitor in the pay-TV space, along with millions of dollars in tax waivers, will put local broadcasters at a disadvantage and distort the pay-TV market.

They have therefore called on the Communications Minister, Ursula Owusu-Ekuful, not to go ahead with the intention.

He explained that because the government has cancelled the DTT contract it had with K-Net which is owned by an NDC member, it is using GIBA to fight its cause.

The Assin Central MP who is also the Chairman of the Communications Committee in Parliament claimed K-Net, after being paid $84 million, did a shoddy job so the government decided not to renew the contract when it ended the phase one.

“I will expose GIBA; we are trying to solve the problem but you are creating the impression as if Ursula has taken the job from K-Net, why,” Ken Agyapong asked. 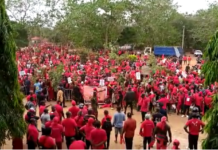