The General Secretary of the opposition National Democratic Congress (NDC) has urged NDC communicators not to fall for the antics of the New Patriotic Party (NPP) following suggestions by Asantehene Otumfuo Osei Tutu II that the palace had to persuade Mr John Mahama to concede defeat in the 2016 presidential poll.

According to Johnson Asiedu Nketia, the NPP’s mingling of the issue is just to divert attention of the nation from the mess the country is facing.

“I want to use this platform to call on all NDC communicators not to fall for the attempt by the NPP to use Otumfuo as a bait to divert attention of the nation from these burning issues,” he said at a press conference, Monday.

He wants party communicators to rather concentrate on exposing the problems bedeviling the country under the Akufo-Addo government.

General Mosquito, as he is affectionately called, believes former President Mahama rather demonstrated better leadership in crisis unlike President Akufo-Addo whom he said refused to concede defeat.

“If NPP wants us to compare who is a better democrat, the verdict is clear, that is President Mahama. NPP is jubilating that Mahama took Otumfuo’s advice into consideration before conceding, how does that make him less of a democrat as opposed to somebody who rejected that same advice? Drowning person will want to hang onto any straw but this will not work,” he added.

ALSO: Audio: Chiefs are not liars- Minister to Mahama over Otumfuo’s comment 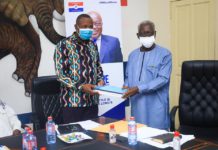