The National Democratic Congress (NDC) has charged the Ghana Police Service to arrest Assin Central Member of Parliament (MP) for being behind the actions of pro-New Patriotic Party (NPP) vigilante group, Delta Force.

Communications Officer of the party, Kwaku Boahen speaking on Adom FM’s Morning Show, ‘Dwaso Nsem’ Monday, said the Legislator have been funding the group and hence has grown to become a threat to the country’s democracy.

“We are set to petition the police for them to arrest Kennedy Agyapong now…he has accepted responsibility for their (Delta Force) actions, he has been funding and arming them even with guns…,” he said.

Delta Force has been in the news in recent times for dragging the Ashanti regional security coordinator, George Agyei out of his office.

13 members of the group were subsequently arrested and were put before the court for breaking into the regional coordination council.

However, pandemonium broke out at the court when the judge ruled that the 13 be remanded into prison custody leading to an escape of the 13 Delta Force members.

They have all surrendered and are currently in prison custody. The case would be called this week.

Kwaku Boahen however argued that the MP for Assin Central ought to be blamed for all these happenings in the country as the businessman has openly confessed being behind the group.

The Delta Force members, he said, were all trained in armed combat by the NPP while in opposition and hence are exhibiting the skills they received then.

The NDC, Kwaku Boahen continued ‘would be writing a letter to Parliament’ and call on the Speaker of Parliament to drag Ken Agyapong before the privileges committee of the house for undertaken acts that are dragging the name of the house into disrepute.

“We are writing a letter to Parliament, the speaker must haul him before the privileges committee…his action is words is what is urging the boys on…,” he said.

The same petition, Kwaku Boahen said would be addressed to the Ghana Independent Broadcasters Association (GIBA) and the Ghana Journalist Association (GJA) calling on the two bodies to ban Ken Agyapong for appearing on radio and television.

The diplomatic community would also be petitioned to prevent Ken Agyapong from travelling outside the country as he become a threat to the country’s democracy.

Reacting to the call of Kwame Baffoe, the Brong Ahafo Regional who was a co-panelist on the show said the NDC was only expressing ‘political hypocrisy’ over the Delta Force issue.

The attempt to stop Kennedy Agyapong from coming to the media ‘is just an attempt to prevent him from exposing the rots in the Mahama administration…,” he said. 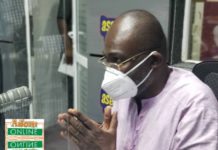