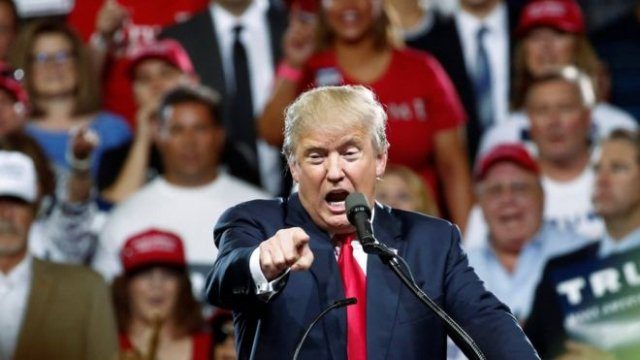 US presidents tend to receive their fair share of honours, but Donald Trump may want to ignore his latest one.

A newly discovered amphibian that buries its head in the sand has been named after him, apparently in response to his comments about climate change.

The Dermophis donaldtrumpi, which was discovered in Panama, was named by the head of a company that had bid $25,000 (£19,800) at auction for the privilege.

The company said it wanted to raise awareness about climate change.

“[Dermophis donaldtrumpi] is particularly susceptible to the impacts of climate change and is therefore in danger of becoming extinct as a direct result of its namesake’s climate policies,” said EnviroBuild co-founder Aidan Bell in a statement.

The small, blind, creature is a type of caecilian that primarily lives underground, and Mr Bell drew an unflattering comparison between its behaviour and Mr Trump’s.

But Mr Trump, whose administration has pursued a pro-fossil fuels agenda, has accused those scientists of having a “political agenda” and cast doubt on whether humans were responsible for the Earth’s rising temperatures.

“I don’t know that it’s manmade,” he said in an interview with CBS’s 60 Minutes in October. “I’m not denying climate change but [temperatures] could very well go back,” he added, without offering evidence.

Last month, Mr Trump questioned a report by his own government that found climate change would cost the US hundreds of billions of dollars annually and damage health.

“I don’t believe it,” he told reporters at the time.

After taking office he announced that the US would withdraw from the Paris climate change agreement, which commits countries to keeping a limit on rising global temperatures.

He justified this decision by asserting that he had been elected to serve the citizens of Pittsburgh and not Paris and the deal disadvantaged US businesses and workers.