A popular politician has corroborated the prophesy about the death of former Vice President, Paa Kwesi Amissah-Arthur.

Ernest Owusu Bempah claims he was in the auditorium of Rev. Isaac Owusu Bempah on December 31, 2017 when he prophesied about Amissah-Arthur’s death.

The founder and leader of Glorious Word and Power Ministries International has received a barrage of attacks from the public for claiming he predicted the death of the former Vice President.

In the said prophecy, the man of God claimed the late Amissah-Arthur will be used as a sacrificial lamb for the operations of his party, the National Democratic Congress (NDC).

When his prophesy came true on Friday June 29, 2019 and he came for his credit, he was bombarded for being insensitive to the late vice president’s family.

But on Asempa FM’s Ekosii Sen programme Friday, Ernest Owusu Bempah doof his cap for the man of God for being the most credible prophet in Ghana.

“I’m a very wise man so I will not ignore any prophesy about me. It is stupidity to dispute a man of God. If the NDC had acted on the prophecy, Amissah-Arthur would be alive” he stated.

The Director of Communications for the Ghana Gas Company said Prophet Owusu Bempah now has a proven track record which cannot be challenged.

Owusu Bempah charged Ghanaians not to touch the anointed man of God and rather obey his words. 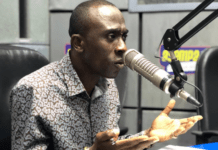