Some constituency executives and stakeholders of the National Democratic Congress (NDC) in the Yilo Krobo constituency in the Eastern region have petitioned the national executives of the party to allow all three aspirants to contest in the primary which has been withheld.

“We join the call of 80 branch chairpersons out of 133 who have indicated that all three aspirants in the Yilo Parliamentary race (Hon Andrew Sodah, Mr Michael Ologo and Albert Tetteh Nyarkotey) must be allowed to contest,” they said.

According to the concerned stakeholders which include past executives of the constituency, the party will face dire consequences if any of the aspirants is disqualified from the race.

In the petition to the National Executive Committee of the NDC, signed by the Constituency Communication Officer, Emmanuel Akumatey Okrah, the group cautioned the executives to bear in mind and not allow history repeat itself.

“We send this caution fully aware of incidents that led to the NDC losing the seat in our sister Krobo constituency, Upper Manya. The signals prevailing in this case are similar to those that occurred in 2015 at Upper Manya Constituency and we do not want to see the Yilo Krobo seat slip away from the NDC.

The party suspended the parliamentary primary in Yilo Krobo following a petition filed against one of the aspirants, Albert Nyarkotey Tetteh challenging his qualification as a contestant. 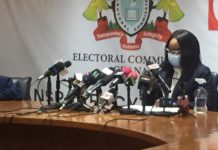 Gyampo writes: Voters register exhibition; do we ever learn?

Woman narrates how her mother had an affair with her husband...