Reports say the students started complaining of severe tummy upsets after they ate ‘waakye’, a popular meal prepared with rice and beans.

The incident happened on Monday after the students took the food prepared from the school’s kitchen, JoyNews has learnt.

Although school authorities are yet to officially speak to the issue, a source close to the school has told JoyNews that scores of students complained of diarrhoea after consuming the food.

The affected students were rushed to the Regional Hospital at Koforidua, where they are receiving treatment, the source added. 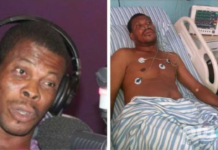