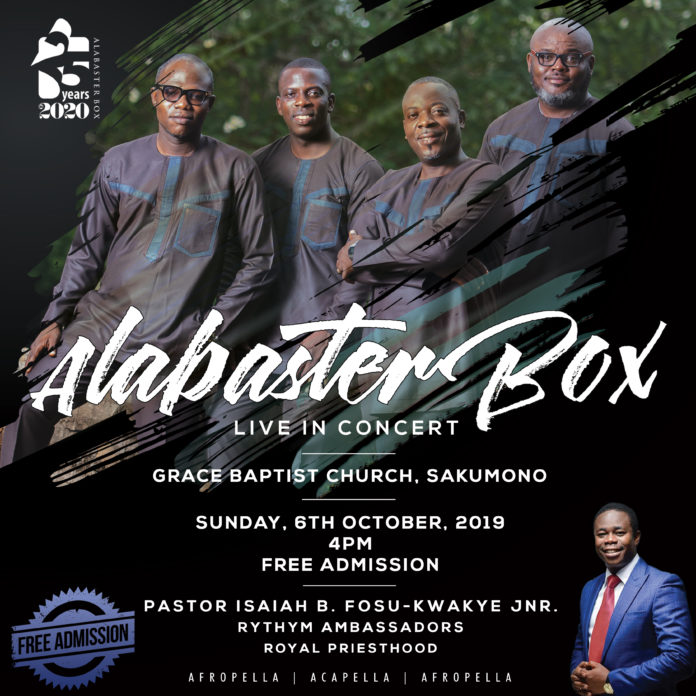 After about a decade of virtual silence in Ghana, the country’s leading and most celebrated Acappella group, Alabaster Box bounces back with an event dubbed ‘Alabaster Box Live in Concert’ slated for Sunday, October 6, 2019.

The concert, which will be held at the Grace Baptist Church in Sakumono, heralds the Silver Jubilee celebration of the group in Ministry, which falls next year.

“So soon Alabaster Box is 25 years and this event is designed to announce the celebration, which will span between January and September next year,” group Founder and Leader, Sammy Dowuona said.

“We chose Grace Baptist Church for this concert because the past 25 years has just been by grace and we felt the need to lay a fond of grace for the grand celebration,” Mr Dowuona noted.

The event would also be an opportunity for the audience to hear some of the Alabaster Box stories and testimonies over the past 25 years, and that will launch the 25th anniversary itself, which will be marked with a number of events.

Mr Dowuona said the Silver Jubilee itself will see a number of events including visits to their alma mater, needy homes, food outreaches among other things, and all that will be climaxed with a grand concert in September.

“During the celebration period, we will also hold a typically all Acappella event where we will showcase the generational evolution of Acappella in Ghana, beginning from pre-Alabaster Box through to now.

“Indeed, some of the new generation Acappella groups in Ghana are doing exploits with harmonies and we intend to celebrate that,” he said.

He said for those who have missed Alabaster Box, this is the time to catch up on old times, and also be part of the next face of the group’s ministry.