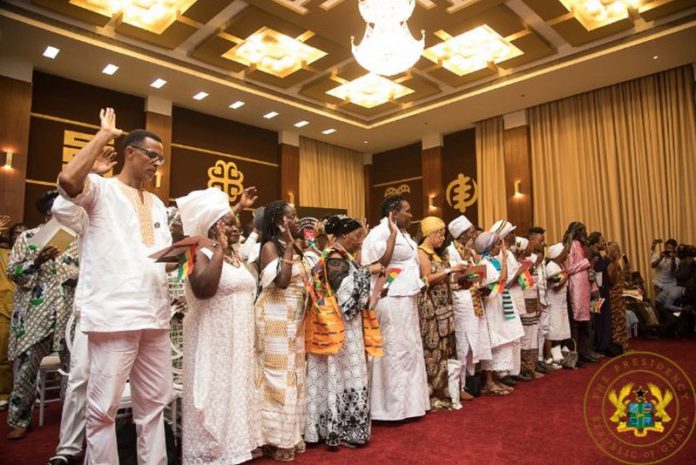 President Nana Akufo-Addo conferred Ghanaian citizenship on 126 Diasporans, who have lived in Ghana for many years.

Speaking after the conferment ceremony on Wednesday, he said, “I am glad you have decided to make Ghana your home, and thereby, join several generations of Diasporans, who committed their lives to us.”

He noted that several persons, including the likes of George Padmore, Bob Marley’s widow, Rita, Maya Angelou, and W.E.B du Bois all found homes in Ghana, with the latter buried in the country.

With the ceremony being part of the series of activities commemorating the ‘Year of Return’, the President stated that Ghana recognizes her position as the location for 75 per cent of the slave dungeons built on the West coast of Africa, through which the slaves were transported.

“That is why we had a responsibility to extend a hand of welcome back home to Africans in the diaspora. Many have responded to this call, and the ‘Year of Return’ has so far proven to be a joyful and learning experience all round for all of us,” he said.

To the 126 Diasporans, the President urged them to respect and abide by the laws of Ghana and live in accordance with the tenets of Ghana’s Constitution.

“You have the responsibility of preserving and promoting the image of a country whose reputation, amongst the comity of nations, is, today, high. You are citizens of a country that is regarded as one of the most stable on the continent, a beacon of democracy, governed by the rule of law and respect for individual liberties, human rights and the principles of democratic accountability, as a result of the commendable acts and deeds of past and present generations of your fellow Ghanaians,” he said.

The President continued, “In all your actions, I urge you to guard jealously our country’s image. It is a charge, I am confident, you will uphold. In doing so, I suggest that to facilitate the process of re-integration, you learn at least one Ghanaian language of your choice – Akan, Ewe, Ga, Dagbani, Hausa, or Nzema, amongst others.”

President Akufo-Addo urged them also to be engaged fully in the realization of the vision of a Ghana Beyond Aid.

“Simply put, I just want us to be self-confident, and accept that we shall never reach the level of development we aspire to by relying on aid or external assistance, no matter how generous. It is a mindset that I wish us to discard, a mind-set of dependency and living on handouts,” he added.

President Akufo-Addo, in concluding, paid tribute to the late Otanka Obetsebi-Lamptey who as Minister for Tourism and Diasporan Relations under government of John Agyekum Kufuor, championed the cause for the return of descendants of the slave trade to their homes of origin.

“He instituted the “Joseph Project”, whose aim was to reconcile and unite the African peoples, on the continent and in the Diaspora, and to release their energies to help build Africa and the Caribbean. This ceremony would be a happy moment for him,” he added.