Zimbabwe’s state-owned airline has laid off 200 workers, roughly half of its staff, with immediate effect.
The job losses are part of a turnaround strategy to bring struggling Air Zimbabwe back to profitability from a $300m (£230m) debt.
Last month the EU banned it from using its airspace, citing safety concerns.
There have been major changes at the national airline since President Robert Mugabe’s son-in-law took over as chief operating officer last year.

“We were overstaffed by a lot and we are also trying to weed out people without the right qualifications,” the airline’s chairwoman Chipo Dyanda said on Wednesday.
“The retrenchment is meant to give space to the airline so that we can redeploy the money saved back into the company.”
An Air Zimbabwe spokesperson told state media that management has also been trimmed from 28 to just 12 and the finance department from 36 to 17.

The airline has struggled to keep afloat over the last decade and plans to carry out a restructuring exercise that will include retraining for all staff, including top management. 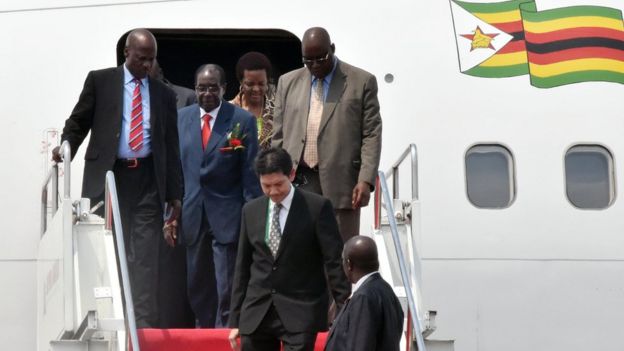 Unconfirmed reports say that a name change is also in the pipeline – a move many believe is an attempt to ring-fence the airline’s debt and reduce the threat of creditors seizing the planes.
The BBC’s Shingai Nyoka in Harare says that President Mugabe is a frequent flier on the airline, often leasing out the largest plane for state visits and private medical visits to the Far East.
In May, President Mugabe said that Zimbabwe was the most-highly developed country in Africa after South Africa. He denied that the country was in a fragile state.
Zimbabwe has been struggling to pay its civil servants recently and is ranked 24th on the UNDP’s Human Development Index for Africa.