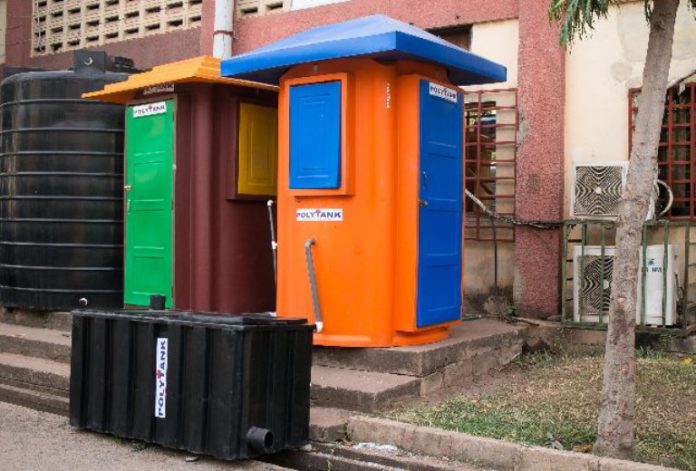 In a bid to get closer to the Millennium Development Goal of halving the 2.5 billion people without sanitation access, innovative solutions such has the invention of the mobile toilet system has immensely reduced the issue of improper waste management in Africa especially Ghana.

Advancement in portable technology has allowed the early adoption of portable mobile technologies; by providing a unique opportunity for the region to bridge the gap between the lack of proper waste management and the hassle of travelling a long distance to relieve one’s self.

The challenge of sanitation intervention has always been to keep up with the growing population. This growth in population has resulted in overcrowding and exacerbating sanitation issues. As a result, people often have no choice but to use bushes, beaches, gutters and uncompleted buildings as places of conveniences which are un-dignifying and also increase the risk of spreading deadly diseases.

Inadequate decent toilet facilities, especially in cities continue to be a major health threat that affects the majority of Ghanaians, despite general improvements in urban sanitation programs. In the last twenty years, sanitation coverage has made great strides, but it continues to be less accessible to the urban poor; the more reason, the nation of Ghana needs to adopt ‘Every Community, a Portable Toilet’ strategy.

Reasons being that having portable toilets at vantage points on the stretches of our urban roads will reduce the pressure of having people use filling stations, hotels and people’s homes as emergency restrooms for easing themselves.

With portable mobile toilets, our gutters and dumping sites will be free from human excreta. It will come in handy for communities to have portable toilets to reduce and eradicate open defecation. ‘Every community, a portable toilet’ initiative will provide consumers with a unique, safe and healthy maintainable facility which is affordable and effective in the long-term.

With the emergence of portable toilet systems, the pressure that mounts on public toilets will reduce and the limited capacity of public toilets which has resulted in people either urinating outside or defecating into containers popularly referred to as ‘wrap and throw’ will cease. The issue of “Do not urinate here” written on people’s walls will also stop; as people will be compelled to use the mobile toilet than openly spraying urine on people’s walls.

The placement of portable mobile toilets on vantage points on highways will serve as a source of income and employment for individuals or agents who would want to manage it and ensure its maintenance. It will further minimize people defecating on the highway. Portable sanitation like Mobile toilet will go a long way in decreasing the likelihood of adverse health epidemic in the nation.

Ghana’s leading producer of water tanks and sanitation storage products, PolyTank has introduced a new mobile toilet system that seeks to change the lives of Ghanaians by improving access to decent and adequate toilet facilities in peri-urban communities. The complete portable toilet system is made up of a moveable kiosk fitted with a toilet bowl which has a flushing mechanism, a handwashing sink and a bio-digester for waste disposal and management.

The attached bio-digester helps to chemically treat the urine and faeces through an inbuilt system, making the disposed sewage environmentally safe. The toilet is also made with high quality ultraviolet raw material that repels insects such as termites, carpenter ants, wood borers which are found in wooden structures. The new mobile toilet is lighter and provides consumer privacy in a well-ventilated space and an adequate hand washing basin to prevent the spread of bacteria and cross-contamination.

How does the bio-digester toilet work?

PolyTank’s bio-digester technology decomposes human excretory waste in the digester tank using specific high graded bacteria; converting it into methane, decomposed solids and water discharged further to the desired surface. The solid human waste is broken down to affluent by the methanogenic bacteria culture supplied with the bio-digester.

This environmentally friendly toilet system resolves the problems of un-decomposed human waste by degrading and converting human waste into usable water and gasses in an eco-friendly manner. It produces biogas and the liquid effluent can be recycled to flush toilets, for irrigation or channelled to a sock pit. The gas produced will supplement the gas from the bio-digester.

Due to the inbuilt overhead water storage tank which can store up to 200 litres of water for flushing, customers wouldn’t have to worry about the shortage of water. The moveable toilet system which comes in a combination of colours can be easily assembled and disassembled making it suitable for homes, construction sites, and outdoor events such as festivals, parties, funerals, concerts and conferences.