Operations manager of Premier league winners. Aduana Stars, George Gyewu has stated that his side will do everything possible to retain the league trophy in coming seasons.
Aduana stars won their first league title in their maiden appearance in 2009, this Mr. Gyewu said is unprecedented for a club making its first appearance and winning it.
“This is our second title since we joined and moving on from this feat, we will work harder to retain the title in coming seasons”, George stressed.
“We have gathered a lot of experience and this time, we will not compete in the CAF Champions league and make a mark. Aduana stars will surely get the best players and make Ghana proud on the Africa Continent”.
Aduana stars won the 2016/2017 premier league after 30 round of matches and amassed 57points. 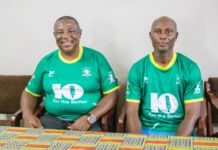