The 63-year-old actor was reported to have sneaked out of the bedroom and crept to the kitchen to hang himself on Thursday, 12 July 2018 at his Brafoyaw residence near Cape Coast.

A poster of the late actor’s obituary indicates that there will be wake event for him on Friday, October 5, 2018, from 8 pm at Gomoa Aboso, Swedru in the Central Region.

Pre-burial and burial services will be held on Saturday, October 6 and thanksgiving service also on Sunday at Aboso, Swedru respectively.

Kuntu was part of the Adehye Drama Group along with Joe, Adadzewaa, Abeiku, Basiwaa, amongst others. 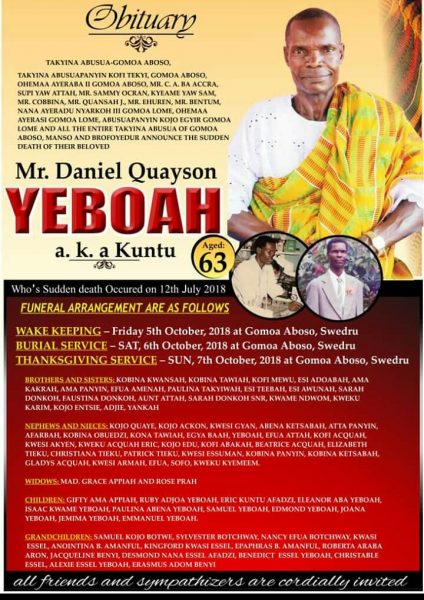 He was one of the favourite characters of many TV viewers because he was a hilarious actor.