Six suspects who were arrested during the New Patriotic Party (NPP) delegates conference at the Aliu Mahama Sports Stadium on Friday have been granted bail.

The suspects who gained unlawful entry to the premises have been granted GH¢50,000 bail with one surety each while investigations continue.

They were detained at the Northern Region police headquarters on suspicion of trying to cause mayhem at the venue.

Police said five of the suspects were found hidden in some rooms at the conference grounds and the other suspect was also hiding in a secret room allegedly placing a call. 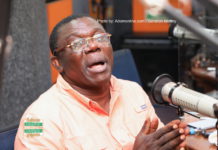