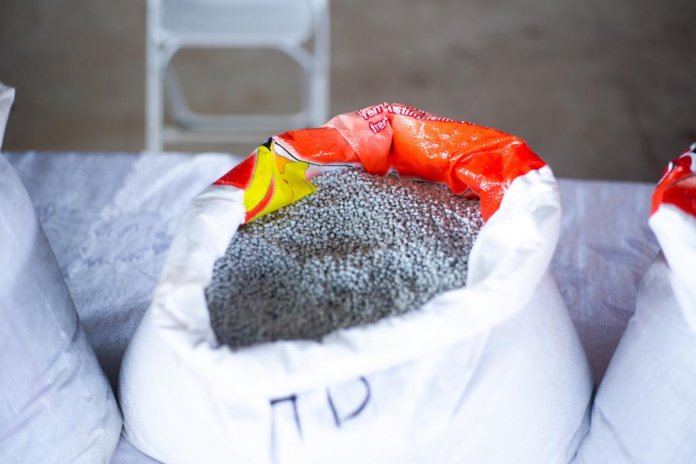 Three persons are in the grip of the police for their alleged involvement in the re-bagging and illicit smuggling of government-subsidized fertilisers.

They were picked up during a joint Customs, COCOBOD and Police swoop at a warehouse used for the operation at Amanfrom in the Greater Accra Region.

Some of the local fertilisers re-bagged include the Planting for Food and Jobs (PFJ) fertilisers, Sidalco fertilisers and some other sorts belonging to the Ghana COCOBOD.

A total of 15 fully-loaded trucks were impounded. Nine of these trucks are with Burkinabe registration numbers, while six are Ghanaian registered. Each of the trucks contained at least 1,000 bags of re-bagged fertilisers.

During the swoop, two warehouses with about 30 workers were discovered. The warehouses were packed with hundreds of PFJ and COCOBOD fertilisers, which according to officials, were originally meant for farmers.

According to the Principal Revenue Officer of the Ghana Revenue Authority (GRA), David Dotse, “the Fertagro mix all of these fertilisers with the PFJ ones, together with some other one they claim they import from Egypt and re-bag them into other 50kg bags.”

It is unclear how Fertagro secured all the local fertilisers because, according to COCOBOD officials, “these products are not sold directly on the local market.”

The GRA, COCOBOD and Customs are collaborating with other state institutions to investigate the matter.

Meanwhile, President of the Peasant Farmers Association, Dr Charles Nyaaba, said the discovery is not surprising.

According to him, “this new expose is just the tip of the iceberg. There is a cartel of very powerful persons who take delivery of some of these fertilisers right at the port and move them to other locations but report back to the government that the fertilisers have been delivered to the farmers.

“We have raised these concerns repeatedly, but nobody seems to care. When our fertilisers were loaded on donkey backs to cross our boarders out of the country, the Minister didn’t act. So, until we begin to take drastic action against this, the phenomenon will continue” he said.