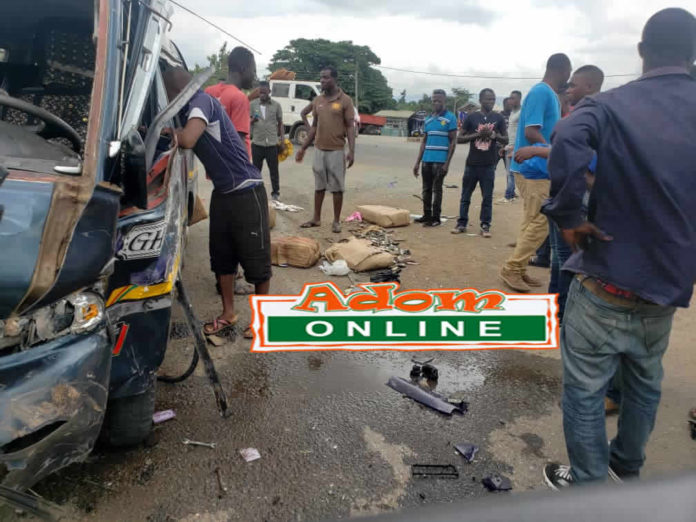 Two persons – a man and a woman – died on the spot when a Ford bus carrying 15 passengers overturned on the Obuasi-Dunkwa highway on Thursday afternoon.

The driver of the bus, who is on admission, was said to have lost control of the steering wheel after a tyre burst at Camp Nkwanta community, near Tweapiase.

Eleven others, including two in critical conditions, were also taken to the Obuasi Government Hospital after the accident that happened at about 12:15 pm.

Samuel Odai of the Obuasi Divisional Police Command said it took rescuers close to 30 minutes to get all the passengers out of the bus with registration number GX 3250–16, which was travelling from Kumasi to Tarkwa.

According to the police officer, who was at the scene of the accident close to a police barrier he was manning, two bodies were taken to the morgue at the Obuasi Government Hospital.

Eyewitnesses told DAILY GUIDE that the bus burst a rear tyre as the driver was negotiating a sharp curve at a portion of the road, losing control in the process.

“Before anybody could think of something else, the bus had hit a culvert and it began to somersault,” one of the surviving passengers disclosed.

According to him, the bus finally landed on a male passenger after he was thrown out of it, crushing his head in the process.

He indicated that some of the passengers were thrown out of the bus, while others were trapped inside with broken limbs and crushed heads.