Two persons have been arrested in connection with clashes between Konkombas and Dagombas at Nakpachie, near the Yendi Municipality of the Northern Region over the killing of a pig.

The suspect, Ziblim Hassan, who allegedly shot and killed a pig and inflicted gunshot wounds on the owner, was arrested in Yendi with 44 live cartridges found on him. Another person, suspected to be his accomplice, was also arrested.

However, a statement signed by the Minister for the Interior, Ambrose Dery, indicates that the Ministry for the Interior has on the advice of the Northern Regional Co-ordinating Council and by Executive Instrument imposed a curfew on Nakpachie and its surrounding villages in the Yendi Municipality of the Northern Region from 6 pm to 6am effective Thursday, 8th November, 2018.

Government calls on the chiefs, elders, opinion leaders, the youth and people of the area to exercise restraint in the face of the challenges confronting them and urged them to use non-violent means to solve their grievances.

Meanwhile, there is a total ban on all persons in the afore-mentioned communities and their environs from carrying arms, ammunition or any offensive weapons and any person found with any of that would be arrested and prosecuted.

The Northern Regional Security Council (REGSEC) led by the regional minister Salifu Sae-eed visited the Nakpachie community to ascertain the real state of the incident in the area.

The minister appealed to the two parties to live in peace and harmony adding that Dagombas and Konkombas are brothers and sisters and should therefore live together.

According to the minister, people are relating to the fracas as Dagombas and Konkombas fight which he said could cause further tension in the area and therefore warned that people should stop relating to it as such.

He assured both parties that REGSEC would do everything within their power to make sure that peace prevails in the Nakpachie community.

READ: I respect Akufo-Addo for his values, principles – Rawlings

The Konkomba chief Malgu Naa assured REGSEC and the Dagomba community that his people would do everything possible to maintain the prevailing peace.

He, however, appealed to REGSEC to call the Dagomba people who fled the town to return home.

A representative of the regent of Dagbon said the overlord was very sad about the situation and appealed to the two parties to resolve any issues prevailing among them so that they can continue to live amicably.

One person died while several others sustained injuries after clashes between Konkombas and Dagombas at Nakpachi – a community in the Yendi Municipality of the Northern Region on Thursday.

Adam Alhassan, 50, the Chief Imam of the community, was shot dead during the clashes. 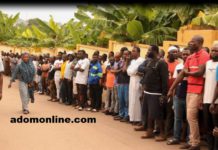