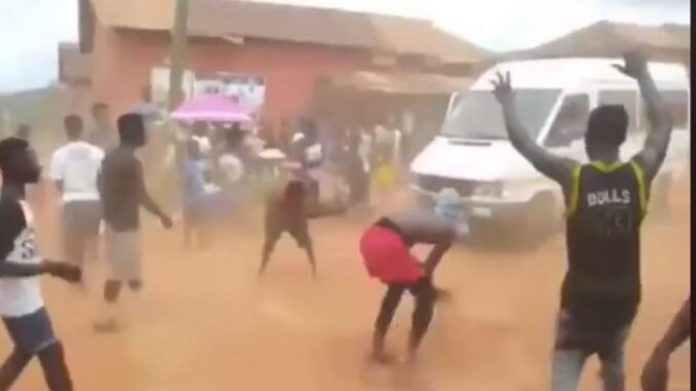 Residents of Patakro in the Adansi North District of the Ashanti region have been captured in a video hooting at and chasing out a convoy of party-branded vehicles belonging to the New Patriotic Party (NPP) Parliamentary Candidate for the Fomena Constituency, Philip Ofori Asante.

The vehicles had the picture of the president and NPP flagbearer for the 2020 elections, Nana Addo Dankwa Akufo-Addo conspicuously posted on them; a police patrol vehicle escorting them was not spared.

Some of the partakers were seen wielding brooms sweeping dust behind the convoy to symbolise in typical Ashanti fashion that they are not welcome and never want to be seen in the town.

Patakro is the hometown of the incumbent Member of Parliament (MP) for the Fomena Constituency, Andrew Amoako Asiamah who entered parliament on the ticket of the NPP but would be contesting the 2020 elections as an Independent Candidate following a long held rivalry with the party’s Constituency Chairman, Akwasi Anti Asamoah and other executives in the constituency.

Independent checks by MyNewsGh.com suggested that the electorate of the Fomena Constituency are sharply divided over who to vote for in the upcoming Parliamentary Elections; some say the party chairman, Mr Anti has become a lord unto himself and has through dubious means ensured that, every MP since 2008 goes only one term.

Mr Asiamah is the third MP who would not be contesting on the ticket of the NPP for a second term in the Fomena Constituency since 2008; but this time round, he enjoys massive support from his hometown of Patakro, Akrokerri and other villages in the hinterlands.

Mr Asante, who became the Parliamentary Candidate at his first attempt unopposed per our checks, is popular in the bigger towns; he enjoys some goodwill from the neutrals but aggrieved electorate say the conduct of his cousin, Mr Asamoah, the Constituency Chairman could hinder his chances of entering Parliament.

This comes at a time that the ruling NPP has vowed to annex all the 47 seats in the Ashanti region in what it calls operation 47/47.