Nollywood has suffered yet another loss as veteran actor Gbenga Richards has been confirmed dead.

Richards passed away on Thursday May 12, 2022 after battling acute diabetes and high blood pressure.

The once vibrant actor, who was a force to reckon with in the 1990s and early 2000s, had been ill for years, and a ‘go fund me’ was set up for donations for his treatment.

Richards’ first appearance as an actor was to represent Nigeria at the Second World Black and African Festival of African Culture (FESTAC) in 1977.

He also featured in blockbuster movies like ‘Sango’, ‘Mirror in the Sun’, ‘Betrayal by Love’, ‘Fighting Machine’ and a host of others. 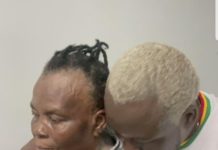