Manchester City flipped the first leg of their Champions League semi-final on its head against Paris Saint-Germain and will take a 2-1 lead back to the Etihad Stadium in a week’s time thanks to goals from Kevin de Bruyne and Riyad Mahrez.

Rarely have City been made to look as pedestrian as they were during a thrilling first half at the Parc des Princes that PSG largely dominated. But Guardiola’s side hit their stride after the break and will fancy their chances now of reaching a Champions League final for the first time in the club’s history.

PSG could have scored plenty in a brilliant and breathless opening 45, and they did carry a lead into half-time thanks to a glancing Marquinhos header from Angel di Maria’s devilishly whipped corner. Neymar, Di Maria and Mbappe were causing City’s defence no end of headaches, while an aggressive pressing game was seeing Mauricio Pochettino’s side controlling the centre of the park.

But City recovered well in the second half and got the equaliser that their pressure deserved on 64 minutes when Kevin de Bruyne’s cross curled all the way through into the far corner, leaving the PSG defenders looking at their goalkeeper Keylor Navas accusatorily. And the accusations were reversed seven minutes later when a Riyad Mahrez free-kick curled straight through a flimsy PSG wall to give City the lead and leave Navas with no chance.

PSG faltered badly in the face of such a complete and chastening turnaround, and the second half went from bad to worse for Pochettino’s side when Idrissa Gueye lunged in on Ilkay Gundogan and was shown a straight red card.

Two away goals and a 2-1 lead leaves City ahead in the tie, with the teams scheduled to meet for the second leg in Manchester next Tuesday. 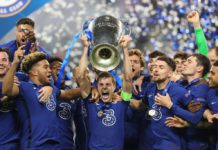 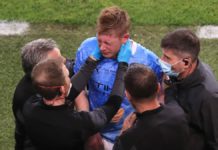 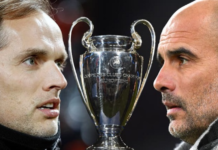