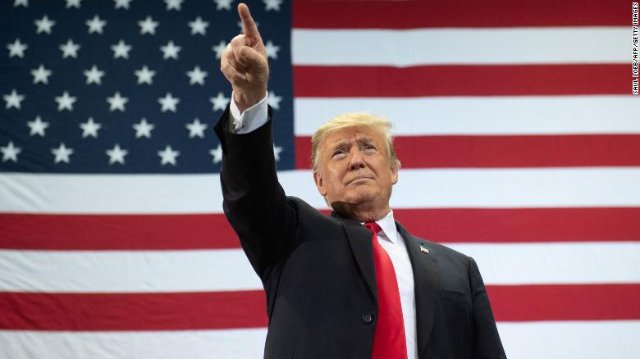 President Donald Trump will no longer pursue adding a question on citizenship to the 2020 US census questionnaire.

Instead, he said he had directed officials to obtain the information through an executive order for government agencies, as court challenges would have delayed a census.

“We will leave no stone unturned,” Mr Trump said.

The retreat follows a long fight over the inclusion of the question, which the Supreme Court had blocked in June.

“We are not backing down on our effort to determine the citizenship status of the United States population,” the US president said.

The order will require government agencies to hand over documents regarding citizenship.

“As a result of today’s executive order we will be able to ensure the 2020 census generates an accurate count of how many citizens, non-citizens and illegal aliens are in the United States of America,” Mr Trump said at the White House.

What reason did the Trump administration give?

The decision to abandon the citizenship question was a “logistical impediment, not a legal one”, said Attorney General William Barr, standing alongside President Trump.

He said there was “ample justification” for the administration to include the citizenship question.

But referring to court injunctions, he said there was no way to “implement any new decision without jeopardizing our ability to carry out the census”.

Census questionnaires without the citizenship question are already being printed.

How did the battle unfold?

At the end of last month, the Supreme Court returned the case to the Census Bureau in a 5-4 ruling that noted the reason for including the question seemed “contrived”.

Government lawyers indicated they had dropped the question and officials began printing the 2020 census without it.

But Mr Trump then announced that he might consider an executive order to include the question or find other ways to move forward.

Legal experts noted that an executive order could not override a Supreme Court ruling.

The White House argued the question would bolster voter protections, but opponents said it could deter immigrant households from taking part in the census over fears the data could be shared with law enforcement agencies. Civil rights groups called it an attack on non-white Americans.

Critics have also noted that lower participation by immigrants could lead to an undercount of populations in Democratic districts, benefiting the president’s Republican Party and changing how seats in Congress are allocated.

The Census Bureau’s research indicated the citizenship question would dramatically reduce the number of people willing to participate, particularly among those who feared it could lead to deportation.

The citizenship question has not appeared on a US census for all Americans since 1950, though it has been put to some subsets of the population between 1970 and 2000.

The once-a-decade population count helps the US government draw up districts for state and local elections, and determine how much federal funding each state receives – a matter of hundreds of billions of dollars.