The loss constitutes an average extra cost of 15Gp per kilowatt-hour (kWh) of energy that consumers pay for electricity, a study conducted by the Africa Centre for Energy Policy (ACEP), has found.

The illegality includes the distribution of unprocessed electricity meters which do not enable standardised reading and billing of consumers under the Self-Help Electrification Programme (SHEP), a community-driven electrification mechanism.

The study said politicians and agents of the power distributors took advantage of the bad system to satisfy their interests.

The research was undertaken to confirm the existence of illegal SHEP metres, raise awareness and make informed policy decisions for reform of the electricity distribution system.

It randomly sampled urban and suburban residential areas in the Ashanti and Greater Accra regions based on the prevalence of illegal SHEP metres in the two regions.

He said over 70 per cent of the metres had non-functioning liquid crystal displays (LCD), hence consumption data could not be accessed by the distributors for the purpose of billing.

“Even if the power distributors are able to locate these meters, they cannot estimate how much power has been consumed for retrospective billing.

“The remaining metres identified show very high consumption with some as high as 28,320 kWh,” he said.

The Policy Lead said also that the study established a disturbing phenomenon he referred to as, “abortion electricity meters”.

“Abortion meters are meters that are deliberately damaged through application of concentrated heat on the digital displays or meters that have their digital components which allows communication with the power distributors removed, all in a bid to erase and prevent electricity consumed from being recorded, especially when it is very high,” Mr Yaotse said.

He explained that power distribution agents, including subcontractors and service providers, actively connived and advised illegal electricity consumers on illegal connections and metre tampering for their private gain.

“It was also revealed that politicians secured SHEP meters from the Ministry of Energy (MoE) to share and connect households to the grid for electoral gains without the active involvement of power distributors,” he said.

He said evidence from the study suggested that the number of illegally installed SHEP meters identified in the research was only a tip of the iceberg.

Mr Yaotse observed that the evidence gathered suggested that the problem was widespread in the country and was brazenly facilitated by electricity power distribution agents.

Even though the SHEP programme has significantly contributed to increase in electricity access rate in the country, the inability of communities to meet the minimum requirements had resulted in meters finding their way into undesignated locations for illegal connections.

“The study raises the need for quick reforms to address the challenge posed by SHEP meters that have been connected illegally and the wider problem of illegal connections and non-payment for power consumed.”

Going forward, Yoatse said, the study recommended that power distributors should immediately take steps to regularise all SHEP meters and eliminate those that were damaged. 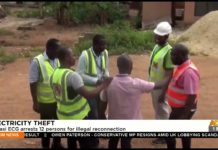