Social media users have been thrown into a state of disarray after a woman posted a video of p3nis-like meat she was served.

In the video, the woman, whose identity is not immediately known, narrated the meat was from a Tuo Zaafi she bought.

According to her, she requested cow intestines locally referred to as Yemadie and paid GHS 2.

With no clue of what the meat could probably be, she didn’t eat it.

As a message of caution following her experience, she urged all and sundry to be careful with what they eat, especially outside their homes. 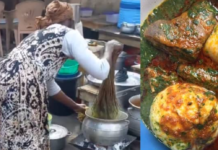