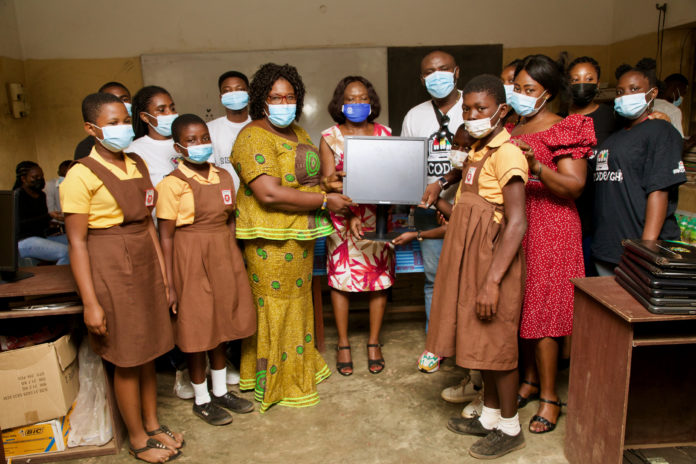 The faces of pupils at the Adentan Community School are beaming with smiles through the benevolence of the non-governmental organisation, Siscode/Gh.

This was after Siscode stormed the premises of the school to mark the end of the academic year celebration popularly known as ‘Our Day’ with them being the first of its kind.

To climax their joy, the charity organisation also donated computers to the school which they explained are meant to enhance the teaching and learning of Information and Communication Technology (ICT) in the school.

Presenting the computers, the Founder of Siscode, Carl Asamoah, stated that the importance of technology cannot be overemphasized.

He explained it was crucial for the pupils to be offered effective education in ICT as the world is rapidly advancing in the field.

“All children must be offered the opportunity to acquire IT skills irrespective of their background. So the computers will enable the teachers to provide practical lessons to the pupils during IT classes instead of the usual norm of sticking to theories and in extreme cases using non-relatable objects to represent parts of a computer,” he said.

Authorities of the school expressed their heartfelt gratitude to Siscode for their immense contribution to the development of the children.

The pupils on their part, speaking to some volunteers at Siscode, said they were extremely delighted about the opportunity.

Siscode Gh is a not-for-profit startup organization set up to help equip underprivileged children in Ghana, especially young girls with IT skills such as coding and expose them to current IT trends like AI, Machine Learning amongst others.

Since its inception in 2020, Siscode has been working hard to make learning and teaching of IT skills available for children who do not get the opportunity to acquire these skills.

Siscode wants to make IT and coding accessible and exciting from an early age.