Lautaro Martinez was at the double and Romelu Lukaku also scored as Inter take a giant step towards their first Scudetto since 2010 with an epic 3-0 victory over rivals AC Milan in the Derby della Madonnina.

In the most significant league meeting between the rivals since April 2011 – the last time the sides met holding the top two positions in the table – Inter started the match leading Milan by a point at the summit.

And it was Antonio Conte’s leaders who drew first blood when Lukaku’s inch-perfect cross was converted by the head of Martinez after just five minutes.

Milan had entered the contest on the back of a shock defeat to Spezia last weekend as they relinquished their place atop of the league, and conceding first was a blow considering Stefano Pioli’s side had failed to win this season after falling behind.

Inter were well worth their lead at the break, although Theo Hernandez did spurn a great chance to draw Rossoneri level.

But Milan made a flying start to the second half and Inter had Samir Handanovic to thank for protecting their clean sheet as the 36-year-old denied two quick-fire Zlatan Ibrahimovic headers before repelling Sandro Tonali.

Inter, however, took control of the contest with a fine team goal against the run of play finished by Martinez from Ivan Perisic’s assist before Lukaku put the game beyond their opponents with a lovely strike on the counter-attack.

The Belgian is the first Inter player to score in four consecutive Milan derbies in Serie A in over 70 years and capped a wonderful day for Conte’s side, who move four points clear of AC Milan at the top of the table. 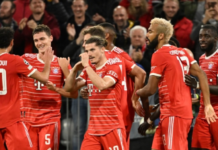 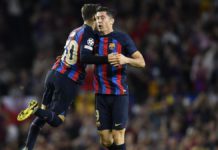 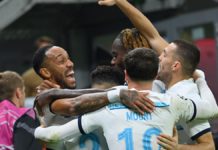 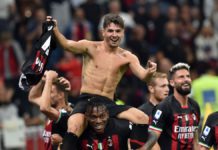 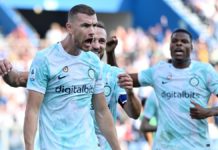