The School Feeding Caterers Association is calling for an overhaul of the secretariat over what they described as a grand scheme to milk the state for the personal gains of a few.

According to them, about 510 ghost schools received GHC12 million as payment for the 2019/2020 academic year while the real caterers are not receiving payments for work done.

“Since the first term of the 2019/2020 academic year, the secretariat has been paying schools which are not on the feeding programme.

“It is estimated that over GH¢12.9 million was paid to over 510 schools across the country which are not on the school feeding programme,” Madam Aboagye alleged.

A spokesperson for the Association, Caroline Aboagye, at a press conference stated the situation was worrying and must be stopped immediately.

in Central, 12 in Northern, 11 in Bono East, and five in the Upper West regions had been smuggled into the payment system of the feeding programme.”

She further appealed to President Nana Akufo-Addo to probe the activities of the Coordinators and Directors at the Secretariat, the national, regional, and district levels. 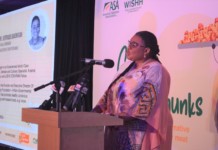