A suspected armed robber has been killed in a gun battle with officers of a police patrol team on the Obuasi-Dunkwa-on-Offin road.

Addressing the media in Kumasi today, COP Mensah-Duku, stated that his officers also returned fire during which suspect Ibrahim was shot and later pronounced dead at the Obuasi Government Hospital.

He narrated that other members of the gang fled the scene, but the police later arrested Issah Abukari, 25, and Iddrisu Bukari, 23, at their hideout upon a tipoff.

The two are currently in police custody assisting with investigations.

COP Mensah-Duku indicated that the duo would soon be arraigned before court.

According to him, a search conducted on the slain suspected robber revealed eight pieces of BB cartridge, seven pieces of AA live cartridge, one mask, a packet of matches, one pack of London cigarette, four wrappers of dried leaves suspected to be Indian hemp, and assorted clothing.

COP Mensah-Duku said the police would conduct an identification parade on October 16, 2019 and asked victims to participate. 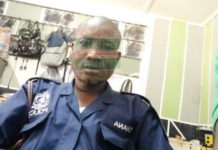 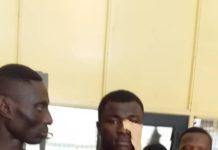 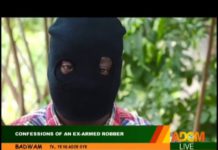 Video: How we get contracts, information for operations – Ex robber reveals

Robber gunned down in shootout with police, one other arrested