Singer Vera Hamenoo-Kpeda, popularly known as MzVee, says prior to her leaving Lynx Entertainment record label she was asked to pay for the car that came with her signage.

According to her, she was surprised the Chief Executive Officer of Lynx Entertainment, Richie Mensah, didn’t collect it but rather asked her to pay in a flexible installment plan.

Speaking in an interview, she said:

Meanwhile, MzVee said she owns several other cars, adding that, Mr Mensah did everything right to make her comfortable under his recording contract.

She disclosed how her house rent was taken care of at a point with the label doing everything to keep her managed.

I own different cars and Lynx was taking care of my clothes too. I was renting the house myself but they pitched in once in a while.

It was a label doing the best it could so you couldn’t get everything but they will try to make you comfortable, she explained on Okay FM. 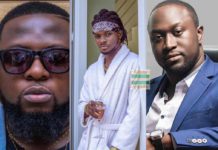