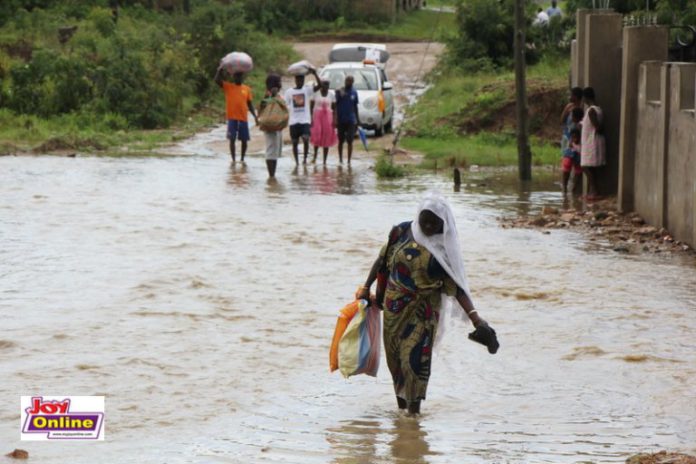 The Saboba District of the Northern Region has been cut off from the rest of the region following the annual flooding of the Kpalba bridge.

Each year between August and September commuters rely on canoes without live jackets to cross to Saboba.

Last year Basic Education Certificate Examination candidates had to be carried across with canoes organised by the assembly to enable them write their final exam. Heavy rains in the area have caused the River to overflow flooding the bridge.

A resident, Timalbe Ama, told JoyNews that women suffer a lot at the peak of every rainy season when they have to travel.

“We only have one canoe which will cross all these number of people. I’ve been here for more than an hour now and I’m still waiting to cross,” she said.

Madam Ama said several appeals to authorities have not yielded anything positive, adding that “our leaders are already aware of the problem so they should help us.”

Another resident, Dimakpe Williams, said he spends more to travel the same distance to Yendi, adding that he now has to pay an extra GH¢40 at the bridge.

“I am going to Yendi, I can’t swim so I am compelled to use the canoe. If I’m going they will take GH¢20 and if coming the same amount,” he said.

He said when people are seriously sick at this time of the year, the difficulty they face is troubling.

He said some of the patients die in the process of waiting for the canoe to carry them across.

“When someone is sick unless they use the canoe to cross with the person, sometimes some even die in the process of crossing,” the resident noted.

He appealed to the government to come to their aid.

Another commuter expressed worry over challenges students face crossing. He said it is risky.

“The students suffer a lot during the rainy season, especially in August and September. Anytime the students are going to school there is only one canoe which overloads them, so those who do not get space are forced to stay home,” he said.