This is three percent more than what they received last year.

Minister for Employment and Labour Relations, Ignatius Baffour Awuah, made the announcement at the 6th Quadrennial National Conference of the Ghana National Association of Teachers (GNAT) in Kumasi.

Persons affected by the decision were unsatisfied and the Ghana National Association of Teachers was no exception.

The Minister for Employment and Labour Relations explained that the negative impact of Covid-19 pandemic on the economy influenced the decision.

“In the peak of the pandemic, we were able to safeguard the work of every public sector worker in Ghana including teachers, for which members of GNAT were included”, he said.

He added, “We had to also negotiate with the leadership of organized labour and in the process, we had to agree that we also had to be modest in our request on the national kitty and that is how we ended at the 4 per cent.

“We had agreed that coming to this year, the four percent will no longer exist and that we are going to give workers a seven percent”.

He however did not reveal when the increase will take effect.

Meanwhile, some teachers at the conference insist that the increase is still not enough.

Listen to the attached audio for more. 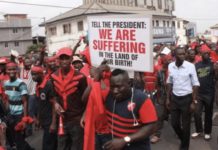