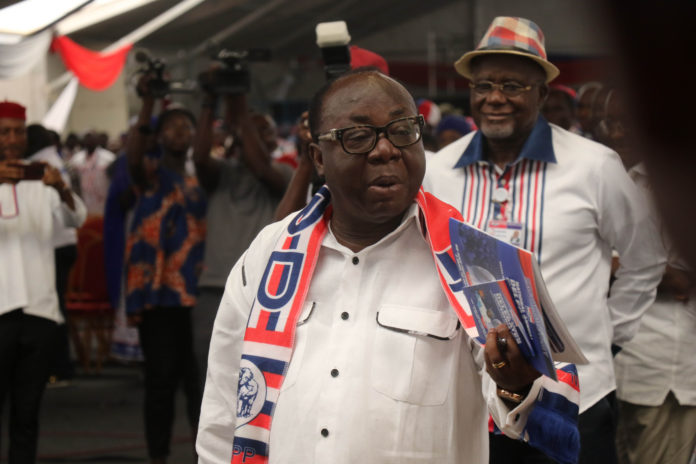 Senior lecturer at the University of Ghana, Professor Ransford Yaw Gyampo, is rooting for the National Chairman of the ruling New Patriotic Party (NPP), Freddie Blay to be appointed Speaker in the 8th Parliament.

He explained that, the former Second Deputy Speaker has what it takes to steer the affairs of the kind of Parliament we are likely to have next year.

“Whether governance and parliamentary processes would be smooth or not, is also contingent on the calibre of the person appointed as Speaker. A choice of Freddie Blay may have a tremendous impact in assuring some parliamentary peace for the executive arm of government,” he said

Read his full article below:

The Next Speaker of Ghana’s First-Ever Near Hung-Parliament

1. The outcome of Ghana’s 2020 Parliamentary Elections points to a Near Hung Parliament, the first-ever in Ghana’s Fourth Republic. A Hung Parliament may be explained in terms of a legislative arm of government, that has no single political party with enough seats to secure an overall majority of membership and votes.

2. Currently, according to the Electoral Commission, the New Patriotic Party, won in the just-ended elections, 137 seats, with the National Democratic Congress, winning 136 seats. There is an independent candidate, and the Sene election results are still outstanding.

3. The two main political parties have served notice of their intentions to challenge some of the parliamentary election results in court. Regardless of the outcome of the court processes and what the results of the Sene elections could be, Ghana is set to witness its first-ever Hung or Near Hung Parliament in the history of the 4th Republic.

4. Depending on how the relationship between the minority and majority is handled, a Near Hung Parliament may be a recipe for governance disaster, particularly given how polarized on extremely partisan lines we are and have been as a nation. It could be used as a countervailing mechanism to deliberately make the country ungovernable, especially when there is no astute politician managing parliamentary business as Speaker.

5. To my mind, the current unique Parliament we are yet to inaugurate, would have to be chaired by someone who enjoys the support and some respect of both sides and has the pedigree and experience in parliamentary practices. It would be politically suicidal for such a Near Hung Parliament to be chaired by a very accomplished person in his or her chosen career, but a political novice and an inexperienced person in parliamentary “real-politik”.

6. That Parliamentary business would be characterized by more rancour, acrimony and bitterness, is indubitable. Without someone who has himself or herself been there before, and has been able to endear himself or herself to both sides, parliamentarians will physically fight as they do in other infant democracies, and government business will stall at all times.

7. Even though there are challenges and likely court processes against some parliamentary seats, it appears that per the current numbers, coupled with the fact that the Fomena Independent Candidate is likely to re-trace his roots to the NPP, the mandate to determine who the Speaker of Parliament should be, would fall on the NPP.

8. Should this happen, and given that the NPP has since 1992 never allowed their Speakers of Parliament to serve two terms, their best bet in replacing the current Speaker should be the 68-year-old Freddie Wosemawu Blay.

9. Ideally, this position should go to a politically neutral person who enjoys respect across the divide. Unfortunately, politicians on many occasions, since 1992, have tended to favour the appointment of partisan people than neutrals in this and other key position. More importantly, the recent conduct and politically ill-timed resignation of Martin Amidu has effectively shut the doors to all cross-party appointments and the quest to look beyond political parties in considering people who are not tainted in partisan colours for appointments.

10. Hence the one to be appointed a Speaker, will, by all means, be a known or surreptitious party person. Granted this, I will choose Freddie Blay over all others. I may not be a fan of his style of partisan politics but, so far in the NPP, he is the only man who in my view, has what it takes to steer the affairs of the kind of Parliament we are likely to have next year.

11. In the lead up to the 1996 elections, Freddie Blay, I remember, played a key role in the Great Alliance that culminated in the selection of the late Kow Nkensen Arkaah as running mate to J.A. Kufuor. At that same year, he run as the Ellembelle Parliamentary Candidate on the ticket of the Convention People’s Party and won.

12. He endeared himself to the NDC that had won the majority of seats in the 1996 parliament, culminating in the NDC’s full support of his nomination as Second Deputy Speaker.

13. He served as Ellembelle MP for twelve years or for three consecutive terms and for two terms, both the NDC and NPP supported his selection as first deputy speaker of parliament under Kufuor.

14. Freddie Blay left Parliament to contest and win the first vice chairmanship position of the NPP in 2015. Following the suspension of Mr Paul Afoko as National Chairman, Freddie Blay acted in the turbulent times and led the party to win the 2016 elections. He was then elected chairman of the party and has won another election in 2020.

15. True to his nature of being able to keep factions at bay and managing them to be able to work together, he has been able to halt the constant infighting between the NPP in power and the Presidency. During the days of Ala Adjetey, Odoi Sykes, Harouna Esseku and Paul Afoko, there was always tension between the party and the Presidency. But in his tenure as chairman of the NPP, he has been able to keep matters quiet and maintain cordial relations between the party office and Jubilee House. The ability to recognize conflictual factions and to prevent them from clashing to create disharmony certainly doesn’t come cheap. Freddie Blay is for sure, doing something that his predecessors couldn’t do to keep a calm and solid relations between the party in power and the government of the day.

16. I have spent two days thinking about who in the NPP may likely typify these features and have the kind of “Wosemawu Experience” but for now it is difficult. It appears Blay has the unique experience that makes him more suitable than any other person, in the NPP for Ghana’s first-ever Near Hung Parliament.

17. He sometimes may have sounded overly partisan in his public discourse to the distaste of many well-meaning democracy watchers. But the fact remains that he has the track record, competence and experiences in sensibly managing potentially conflictual situations and he is very much unlikely to open himself up for minority “antagonistic-disrespect” given his pedigree. These are the sine qua non required to make a Near Hung Parliament deliver effectively on governance for the betterment of all.

18. This is a free political consultancy to the NPP. Whether governance and parliamentary processes would be smooth or not, is also contingent on the calibre of the person appointed as Speaker. A choice of Freddie Blay may have a tremendous impact in assuring some parliamentary peace for the executive arm of government.