The University of Ghana branch of the Tertiary Student’s Confederacy (TESCON), a students’ wing of the New Patriotic Party has eulogised the late Member of Parliament for Ayawaso West, Emmanuel Kyerematen Agyarko.

He described him as a selfless politician and democrat, a gem, gentleman, a statesman and a true patriot.

The Legon TESCON President said they have lost a mentor, financier and motivator who looked beyond partisan politics and put the interest of Ghana first.

“In my experience as a student politician, I haven’t seen a man as seminal as Hon. Agyarko. Beyond just being a party man, he is a real nationalist and loved to help people succeed. May his family be consoled,” he said.

John Apasipanga said he had a personal relationship with the late Ayawaso West MP whom on many occasions gave him pocket money and sometimes paid his school fees.

“There was a distinction in the way he carried himself and interacted with us, the students. He is a gem so I think the NPP has lost a great man”.

READ ALSO: Man arrested for having sex with horse

Mr Apasipanga said thoughts of him will forever linger in the hearts and minds of students, adding that the late legislator will be dearly missed. 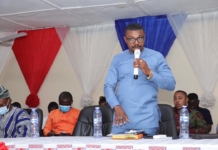