Some New Patriotic Party (NPP) youth from the Okere Constituency in the Eastern region have besieged the party’s head office over what they say is unfair treatment against their candidate.

According to the aggrieved youth, their candidate, lawyer Emmmanuel Adjei Lartey was asked to return the parliamentary forms he picked with the promise that he would be given another one.

The supporters say in spite of that promise, their candidate is yet to receive new forms.

Sharing their frustrations in an interview with Adom News, Yaw Boateng who is the campaign manager for Lawyer Lartey said the Regional Secretary asked his candidate to return the forms with the excuse that the back cover had rules and regulations for Presidential Primary instead of the parliamentary.

“The form was partly filled but he was asked to come for another one and till now, has not received any hence our decision to storm the headquarters to demand for new forms for our candidate,” he explained.

The supporters have threatened a court injunction against the primary in which Mr Dan Botwe, Minister for Regional Planning and Development is contesting as the incumbent MP after he was elected in 2008. 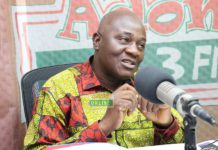