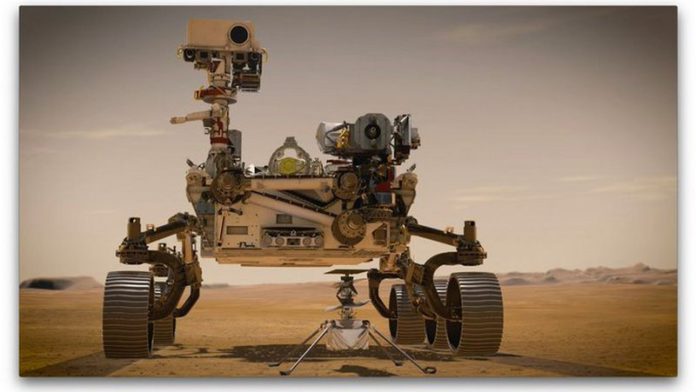 On July 30, 2020, a rocket carrying two robots, the rover Perseverance and helicopter Ingenuity, set off on its six and half month journey through the ink-black nothingness of space. Its destination: Mars.

Touching down on the Red Planet on earth day February 18, 2021, the two robotic companions began their lonely journey together trundling and hovering across the surface of the planet.

Their mission is to find signs of habitability, as humanity continues to see if there really is any possibility of life on Mars – either for us or for something else.

As it goes about its mundane daily work looking for signs of ancient extraterrestrial life in a bid to save the human race, Perseverance pauses from time to time to take in its surroundings.

But what did the rover spot when it looked up into space?

Looking up it saw one of Mars’ two moons, Demios.

Sky watching is fun no matter where you are. I took this short time lapse movie to watch for clouds, and caught something else: look closely and you’ll see Deimos, one of two moons of Mars.

Deimos is tiny, an irregularly shaped ‘moon’ in Mars’ orbit and is smaller than its larger sibling Phobos.

Perseverance’s time-lapse lasts for 17 seconds and picks out a shining star-like object in the sky – this is Deimos.

Its team said: “Sky-watching is fun no matter where you are. I took this short time-lapse movie to watch for clouds, and caught something else: look closely and you’ll see Deimos, one of two moons of Mars.”

Deimos is the namesake of the Roman god of panic and is a mere seven miles in diameter, making it shorter than Manhattan in New York.

It orbits the Red Planet once every 30 hours and has an unusual shiny appearance – It looks smooth, especially when compared to our own moon.

This is because when it is struck by rocks in space it doesn’t have the gravitational force to pull back dust knocked off from it – instead they float into space.

The dust is held in place by Mars’ orbit, so when Deimos comes around and passes once again it crashes through a cloud of its own matter burying the craters on its surface like ruins in a sandstorm, softening its details and giving it a shiny appearance.

The rover aims to collect samples from various points of interest on the surface of Mars. This will be with the overall goal of finding evidence of ancient microbial life and further efforts to better understand the habitability of Mars, past, present and future.

It collects its samples with a drill, and then stores and preserves them so that future missions could potentially retrieve them and return them to earth for analysis.

Its mission will last around one Mars year or 687 earth days. At the time of writing it has completed 284 Mars days, known as sols.