National Democratic Congress Member of Parliament (MP) for Juaboso constituency has made some interesting revelations about galamsey operations in Ghana.

The MP, Kwabena Mintah Akandoh, believes there has been no commitment in the fight against galamsey as the operation has become lucrative.

According to him, the Akufo-Addo-led government, despite its pledge to fight the menace, has failed Ghanaians.

“Galamsey was initially for the grassroots and they used to work with the Chinese but it has now been taken to a different level,” he said.

Speaking on Adom TV’s Badwam, Monday, Mr Akandoh stressed galamsey never stopped in Ghana despite the ban that was instituted.

“The fight against the menace has now become a game of options for illegal miners and those on the ground are aware. You will be required to pay hefty monies and when you are not able to pay, about four other options will be laid on the table,” he alleged. 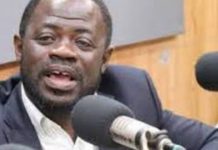