Barcelona continued their good run of domestic form with a 6-1 thumping of Real Sociedad as Lionel Messi bagged a brace and Antoine Griezmann scored on his return to his former club.

The result keeps the Camp Nou side in second place in La Liga and within four points of Atletico Madrid at the top of the table after their narrow 1-0 home win over Alaves earlier in the day.

Marc-Andre ter Stegen made an important save from Alexander Isak with Sergino Dest also striking the crossbar before Griezmann broke the deadlock, finishing on the rebound after Alex Remiro had denied Ousmane Dembele.

Dest doubled Barcelona’s advantage before half time, controlling a Messi pass and finishing into the far corner of the Real Sociedad as the visitors to the Anoeta tightened their grip on the match.

Barca added a third in the second half as Dest converted a Jordi Alba cut back from the byline before Messi added his name to the scoresheet with an exceptional touch and finish from a Sergio Busquets pass over the top.

Dembele had a goal ruled out due to a dubious offside call before he capped the scoring for Barcelona at five, driving through the middle of the Real Sociedad defence to find the far corner of the net.

Ander Barrenetxea scored a stunning solo effort late on to momentarily reduce the deficit to four goals only for Messi to restore the five-goal cushion following a wonderful passing move involving Alba and Riqui Puig. 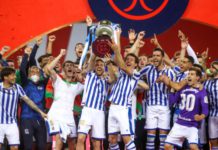