An unknown person has shot dead a 22-year-old man after he allegedly stole spices from a shop at Asuofia-Asamang in the Atwima Nwabiagya North District of the Ashanti Region.

The incident said to have occurred on Tuesday dawn has left several residents in a state of fear and shock.

The deceased, identified as Nana Osei, reportedly went into a shop in the vicinity and stole some spices.

According to them, they heard a loud noise from a group of people within the neighbourhood shouting thief but suddenly a gun was fired.

They followed up in the direction of the gunshot and found a lifeless body in a pool of blood and items including a 25 kg bag of rice. 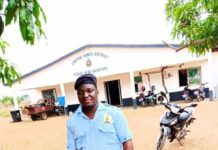