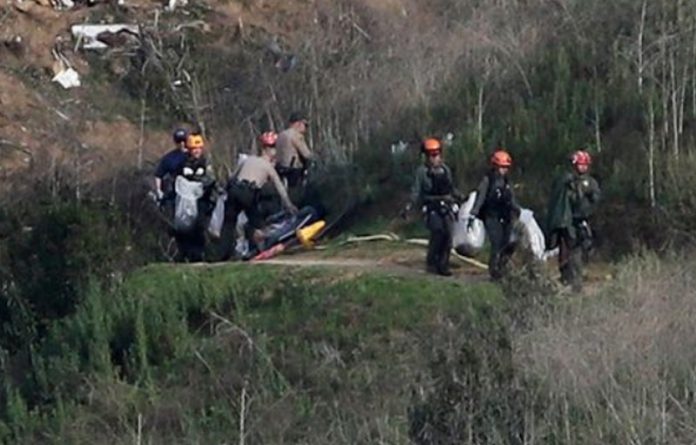 The helicopter carrying former NBA star Kobe Bryant, his daughter and seven others is believed to have plummeted 500 feet in 15 seconds in heavy fog killing everyone on board.

Details of the doomed 39-minute flight from John Wayne Airport on Sunday morning, which had been ferrying the passengers to a basketball tournament 80 miles away, have now emerged.

Pilot Ara Zobayan had tried to turn the Sikorsky S-76 chopper moments before the impact, banking south west – with some suggestion he lost control of the aircraft as he attempted to clear unexpected cloud.

Audio between the pilot and air traffic controllers reveals he was given permission to fly under special visual flight rules or SVFR, despite the treacherous fog.

But he was forced to circle for a quarter of an hour while the air space was cleared by controllers.

Thick fog engulfed the flight path and conditions continued to worsen in the minutes after takeoff at 9.06am, with Mr Zobayan then circling over Burbank from 9.20am.

Remaining in constant contact with air traffic control at Burbank Airport, the helicopter then asked the Van Nuys Tower if it could rotate southwest at 9.39am which was approved.

Mr Zobayan had been given special permission to navigate the difficult conditions by sight without reliance on instruments, and after the maneouvre he confirmed he had regained flight visuals.

The helicopter then began to accent to 1,500 feet before dropping back down at 9.42am to allow the aircraft to show up on the correct frequency as per requests from air traffic controllers.

However, there was no response from the pilot and 40 seconds before the helicopter plummeted to the ground, the tower said: “You’re still too low for flight following at this time.”

Instead, Mr Zobayan climbed to around 2,125 feet, potentially looking to rid himself of the poor weather, before crashing while traveling at 175mph.

Flight data indicates the chopper dropped at 425 feet in its final 15 seconds before crashing into a hillside in Calabasas at 9.45am.

He compared it to driving “on the freeway at a 115mph and close your eyes – what do you think is going to happen”.

Mr Lesourd said choppers are “unstable” and pilots are navigating in 3D rather than straight lines like motorists, and it is “very, very easy to get into spatial disorientation”.

There would have been no other aircraft in the airspace as that had been cleared specifically for Bryant’s chopper to complete its journey without the risk of a midair collision.

And Mr Lesourd said in the valley between the Santa Monica Mountains where it was flying before coming down, it would have struggled to fly above the fog by rising higher.

After climbing, tracking data shows the craft quickly jolted down to just 1,700 feet in what some experts say could have been an attempt to go under the fog – suggesting the pilot was unaware he was flying into a mountain range until too late.

Other aircraft in the area were grounded due to the poor visibility, including the Los Angeles Police Department’s fleet, and despite air traffic controllers granting permission, it is pilots who have the final say, according to the FAA.

The Mail Online reports Mr Zobayan was a highly experienced pilot, who, according to federal aviation records, had been licensed to fly commercial helicopters for 12 years.

While Kurt Deetz, who previously flew Bryant in the same helicopter in 2015 and 2016 said an aircraft like that would not just “fall out of the sky” due to mechanical issues, but is “very complex” to fly.

He said instead it would have likely met its fatal end thanks to the bad weather.

“The likelihood of a catastrophic twin engine failure on that aircraft — it just doesn’t happen,” he said.

The chopper – described by Mr Deetz as like a ‘limo’ – was built in 1991 and is owned by Island Express Holding Corp, which is based in Fillmore, California.

Investigators descended on the crash scene shortly after the crash, which had seen debris spread across the size of a football pitch – with a preliminary report expected from the NTSB within about 10 days.

However, a ruling on the cause can take a more than a year.

College baseball coach John Altobelli, his wife Keri, and their daughter Alyssa, Christina Mauser, a coach at Kobe’s Mamba Sports Academy, passengers Sarah and Payton Chester, were all aboard the doomed flight.

Los Angeles County coroner’s investigators, working alongside aviation NTSB inspectors, said they had recovered the first three bodies from the crash site and were searching for more remains.

In a sign that clouds, fog and limited visibility were of particular interest to investigators, NTSB board member Jennifer Homendy appealed to the public to come forward with any photographs that might help document local weather conditions at the time of the crash.