A rare photo of Afrobeat and Highlife musician, Dennis Nana Dwamena aka KiDi, has cracked ribs on social media.

The photo is believed to be from Ghana’s youngest sugar daddy’s days before fame.

In the photo, he had an Afro and displayed his mini six-packs in a shirtless pose.

The photo had the inscription, Eduardo, on it but it is not clear if that was his nickname back in the day.

This was to commemorate his birthday on Wednesday, August 18, 2021.

The photo has attracted hilarious reactions with many asking where Joey B got that epic throwback photo from. 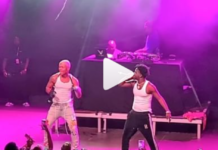