President Akufo-Addo has nominated Justice Anin-Yeboah as the next Chief Justice subject to Parliamentary approval.

A report by JoyNews correspondent, Kwesi Parker-Wilson, indicates the First Deputy Speaker, Joseph Osei Owusu, has referred the letter to the Appointments Committee of Parliament.

If approved, Justice Anin-Yeboah, who is the fourth longest-serving Justice of the Supreme Court, will succeed Justice Sophia Abena Boafoa Akuffo who retires on December 20, 2019.

Justice Anin-Yeboah, a seasoned law enforcer, was appointed to the Supreme Court by former President John Agyekum Kuffuor in June 2008.

Apart from being a Supreme Court Justice, Justice Anin Yeboah is also a part-time lecturer in Civil Procedure and the Ghana Legal System at the Ghana School of Law.

Today in History: Personalities behind three statues in front of Ghana’s Supreme Court 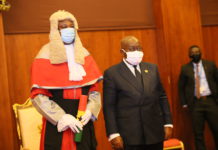