A viral video on social media has captured moments a lady got stuck in a burglar-proof door while allegedly sneaking in on her lover.

Though the reasons behind her choice of the route are not immediately clear, the video captures her midway through the white gate.

The lady who is yet to be identified had her upper body outside while her lower part was on the parlour.

After attempts to get her out probably failed, a welder’s help was sought to rescue her. 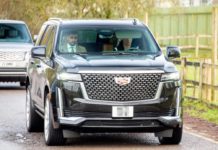