The editor in chief of the New Crusading Guide newspaper is urging the government to put in place measures that will ensure that indigenous banks thrive.
Abdul Malik Kweku Baako Jnr said the relevant regulatory bodies have a responsibility of ensuring that such banks do not collapse.
Speaking on news analysis show, Newsfile on Joy FM/MultiTV on Saturday, he said the pledging of shares by the consortium Belster to Unibank, may be part of moves to help raise capital for the Ghanaian bank which he suspects has challenges.
“It appears to me that Belster Capital had a mission and objective to help uniBank to raise capital. I have a sense that uniBank is going through a certain difficult phase in its operations and so require some support,” he said.

Mr Baako said Belstar and others thought they could manage the situation with a “rescue operation of some sort.”
Officials of Agricultural Development Bank (adb) last week denied that the bank has been taken over by UniBank, an indigenous bank, describing the report as pure lies.
Although there is an acknowledgment of moves to transfer a majority of the shares to uniBank, adb said such an action would have to be sanctioned by the central bank.

Reports about the takeover of adb shook the financial market resulting in the decision by the Ghana Stock Exchange (GSE) to suspend trading in shares of the bank.
To this end, Mr Baako said it is important for the government to create a condition which prevent’s the collapse of any indigenous bank “if we can, as much as possible”.
“We must be committed to that in principle. Nigeria has too many indigenous banks here [in Ghana] and outside elsewhere…I am not sure how many Ghanaians banks operate in other jurisdictions,” he added.
Contributing to the discussion, Deputy Attorney General, Joseph Dindiok Kpemka said the biggest threat to the country’s economic progress is to create a lack of confidence in the indigenous bank.
“Once that perception is created and it gets to people that the indigenous banks are not performing, it will retard progress,” he said.
Mr Kpemka said the government will take the necessary steps and in due course, the Finance Ministry, Bank of Ghana and other stakeholders ministries concerned will come out to set the record straight. 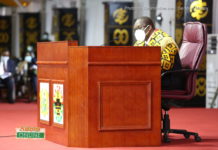